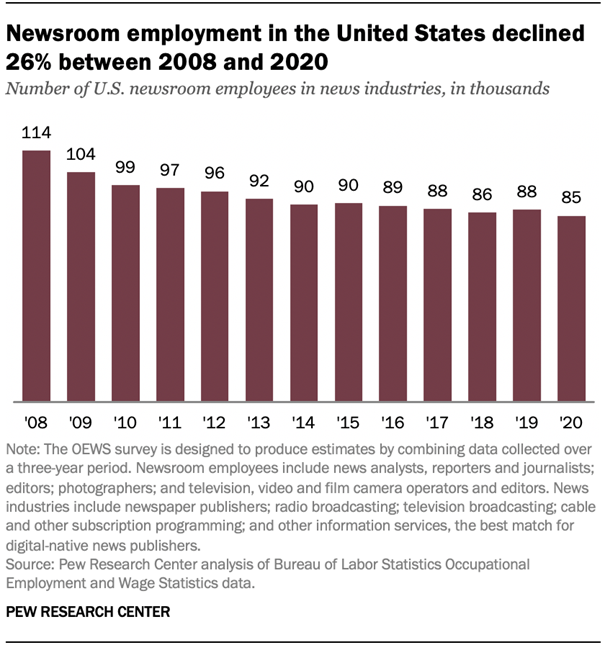 Newsroom employment in the United States has dropped by 26% since 2008. But while newspapers have seen steep job losses during that span, digital-native news organizations have seen considerable gains, according to a new Pew Research Center analysis of data from the Bureau of Labor Statistics.

In 2008, there were about 114,000 total newsroom employees – reporters, editors, photographers and videographers – in five industries that produce news: newspaper, radio, broadcast television, cable and “other information services” (the best match for digital news publishers). By 2020, that number had declined to about 85,000, a loss of about 30,000 jobs.

Changes in the remaining three industries have been less dramatic. Newsroom employment at broadcast TV stations has been relatively stable, hovering around 28,000 between 2008 and 2020, now just behind newspapers in total newsroom jobs. Newsroom employment also has remained relatively steady at cable TV stations, between 2,000 and 3,000 employees over the same period. Radio broadcasting, however, has lost 26% of its newsroom employees, dropping from about 4,600 workers in 2008 to about 3,400 by 2020.

The sharp decline in newspaper jobs means the sector now accounts for a smaller portion of overall newsroom employment than in the recent past. In 2008, newspaper employees made up about six-in-ten newsroom jobs overall (62%). By 2020, the share had dropped to fewer than four-in-ten (36%). In 2020 alone, a third of large newspapers in the U.S. experienced layoffs, and as of August 2020, nearly 2,800 newspaper companies had received federal aid through the Paycheck Protection Program, according to previous Pew Research Center analyses.

Of the different types of jobs included in this analysis, reporters and editors make up the bulk of all newsroom employees.