After managing to eke out small annual gains over the past few years, unit sales of print books dipped 1.3% in 2019 compared to 2018 at outlets that report to NPD BookScan. Units slipped to 689.5 million last year, down from 698.4 million the year before, according to BookScan, which tracks 80%–85% of print sales.

The decline was not unexpected, as sales in 2018 were driven by strong performances of a plethora of political books and the blockbuster success of Michelle Obama’s Becoming, which was the top seller that year with more than three million copies sold. In 2019, Becoming was the #1 title in adult nonfiction, selling about 1.2 million copies.

Without any Trump-related blockbuster titles reaching the sales heights of 2018’s Fire and Fury by Michael Wolff (which sold more than one million copies that year) and Bob Woodward’s Fear (which sold almost 973,000 copies that year), unit sales in the history/law/politics segment fell 9.9% in 2019. And though the continued success of Becoming help to mitigate the decline in biography/autobiography/memoir, unit sales in the segment still fell 9.4%.

The self-help segment had the biggest gain among adult nonfiction segments in 2019, with sales up 11.4%, led by Girl, Stop Apologizing by Rachel Hollis. General nonfiction also had a solid year, with print units ahead 8.8%. Those gains, however, were not enough to offset the declines in the other major categories, leading to a 1% decline in total adult nonfiction sales last year compared to 2018; in 2018, nonfiction sales rose 4.9% over 2017.

Print unit sales in adult fiction fell again in 2019, though at a slower rate than in 2018, when units dropped 4.6%. Boosted by huge sales of Where the Crawdads Sing by Delia Owens, which sold almost two million copies at outlets that report to BookScan, adult fiction sales fell 2.9%. Other positive trends in adult fiction were the continued strength of graphic novels, where units rose 16.1%, and the rebound in horror/occult/psychological segment, where units increased 16.6%. Science fiction had the largest decline among the adult fiction genres, with units down 19.7%. The smaller westerns segment saw units fall 17.2%, and unit sales of romance novels declined 12.4%. While print sales of science fiction and romance continue to endure annual double digit declines since the advent of e-books, mystery/detective, another segment that has suffered, had a relatively mild 3.5% decline in unit sales.

The juvenile fiction category had a small decline in unit sales in 2019 compared to 2018, despite some big sellers, including Dav Pilkey’s For Whom the Ball Rolls (Dog Man #7), which sold more than one million copies. The best-performing juvenile fiction segment was social situations/family/health, where units increased 5.2%. Juvenile nonfiction sales rose 4.5% in the year, helped by Guts by Raina Telgemeier, which sold more than 450,000 copies.

Board books and hardcovers were the only two formats to post unit gains over 2018, and those increases were modest. The most troubling figure was for mass market paperbacks, where unit sales tumbled 15.3%. Sales of mass market paperbacks have been steadily declining for years, but the downward trend looked like it was easing a bit in 2018 when units fell only 6.1% compared to 2017. The return to double-digit declines in 2019 suggests the format still faces challenges. 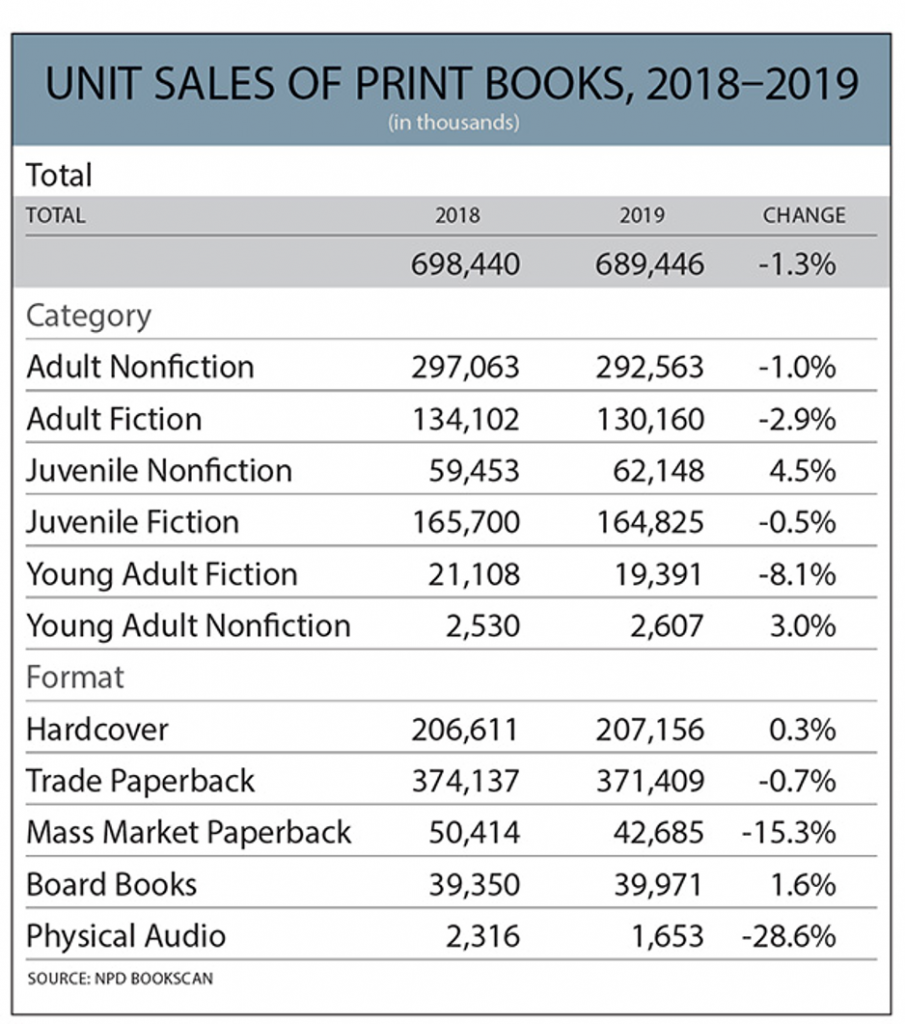